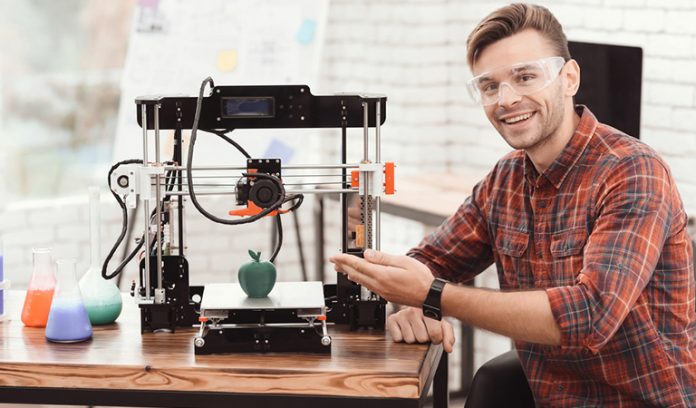 3D printing is a relatively new phenomenon, which first took its baby steps during the 1980s. However, the term 3D printing became famous only during the 2000s and now it’s in regular use in various industries. The benefits of 3D printing are incredibly huge since it has already shown a wide range of uses in the healthcare, packaging and automotive industries, just to name a few.

You’re probably thinking about how a 3D printer could be worth your time. Well, imagine losing an object very dear to you. If there’s a top-quality 3D printer at your disposal, you can easily create a replica of it. You can also print out objects you once had to serve as memories. 3D printing is becoming an increasingly popular technological innovation and this article is here to tell you why. Before delving into the reason behind their popularity, let’s see how a 3D printer actually works. You’ll need a computer-aided design (CAD) package that can produce STL files, where you can draw and model anything from your imagination. If you want to print something that actually used to exist, you can use an object or photograph as a reference for modeling using a digital camera or 3D scanner. The 3D model can be corrected for any errors using a certain type of software. The object is then printed out based on the model by adding layers of material successively on top of one another.

You can print out any idea, any imagination or any memory for yourself, all by spending a few hours without spending much! As mentioned above, many industries make use of 3D printers for research and prototyping purposes, with plastics and metals being the major materials. There’re countless benefits of 3D printing, both for industrial and personal uses. In fact, there are limitless 3D printing ideas that can make anyone’s life better and easier. This saves millions of dollars for industries where they’re commonly used, such as manufacturing, custom art and design, medicine and architecture. To be precise, healthcare industries use 3D printers to print out surgical instruments e.g. forceps and scalpels and even prosthetics. 3D printing can also help create various tissues and organs and make the tissue engineering processes much quicker. Many famous films have indeed used 3D printed objects as movie props since 3D printing was cheaper than getting the real products. Also, anyone can now buy cheap DIY 3D printers that can be used to print a wide range of objects, from your favorite selfie to your lost pen! If you have an ongoing project, such as you’re making a car engine, you will first need to model an object and then test it to see if it works. 3D printers print out models which work as excellent prototypes that you can use to experiment and calculate the risk factors. You don’t have to pay for expensive materials, equipment or pay people to help build your prototype, thanks to 3D printing. You can also get a good feel for how your actual product would feel like or look like. Having to prototype your design or project could take weeks. But with a 3D printer, it’s only a matter of a few hours. Thus, your clients won’t have to waste a lot of time waiting for the prototype to be tested. Since the printing is done through software, the files can be saved for future use. This shows how efficient, quick and convenient 3D printers are! You can tweak any part of the printout with a 3D printer. The nozzle of the printer can make many shapes with some degree of complexity. This is why many people opt to print out dresses, accessories and even jewelry using 3D printers. All industries love to think about sustainability wherein 3D printers have a role to play. When using a 3D printer, the printing out process is neither too energy-consuming nor is it harmful to the environment since a very little amount of waste is produced by these amazing devices.

The Future of 3D Printing 3D printing has been around for a while now and is being applied to various industrial applications as well as for personal or professional use, though it has its own flaws. The technology is still in its primitive form, but the possibilities are endless. 3D printing benefits actually far outweigh the risks associated with using these devices, which is why they’re becoming more popular day by day.

Also, more people are now getting access to 3D printing facilities. There are 3D printing pens instead of printers where users can manipulate the nozzle freely with their own hands to create a printout. This means getting a product whenever you want, however you want! How would it feel to be able to print out your own pizza or cake? You wouldn’t have to worry about baking or burning your hands while cooking your desired recipes! Wouldn’t it be nice if you could print out the pair of earrings you saw online the other day? What if you could even customize it to your own imagination? 3D printouts have known to be especially helpful for architects because they’re easily able to make prototypes via 3D printing. In fact, in China, 3D printers have already been used to print out two separate buildings using only cement and glass fiber, and the buildings have been declared safe to use. 3D technology has also been used to print out eco-friendly cars, Urbee being the first one that appeared in the year 2011. Since then, most automotive companies have been heading towards 3D printing to print sustainable, environment-friendly cars that have lower emissions but are more efficient in performance.

If you’re a struggling musician, 3D printing could be your solution to stepping into the road to success. You could print out your own electric or acoustic guitars and practice at home. You could also be a fashion designer right at your home by printing out various dresses to your size and you could even try printing swimsuits and helmets. Many costumes have been and are being printed out in the fashion and film industries using 3D printers. Companies like Nike are working on developing 3D-printed football shoes. Who knows, maybe even you could try to print out your favorite pair of sneakers by giving out the information of your weight and height and customize to your needs. Also, if your room is messy and you want to start organizing things, you can print out organizers, cardholders and cases or boxes. You can even print out phone cases for your smartphone, completely unique and customized to your own taste. Various tableware, such as spoons, cups, and glasses can be printed out to decorate your dining table. Not just the dining table, you can also add extra ornaments to your home, door knobs and coat hooks to your doors.

Moreover, if you’ve children, how about printing out toys for them? There are many toy companies that now sell 3D printers in collaboration with apps that allow children to design their own toys and let their imaginations come forward in real time. As you can see, 3D printing benefits are simply endless, which comes with a very promising future for applications. From furniture to food, various items are being 3D printed today, making the lives of people much better and simpler. From personal to professional to industrial use, a 3D printer could help you in many ways in all aspects of your life. The affordability and accessibility of 3D printers have made 3D printing a favorite task of many. Its ease of use allows users to print out whatever they want from the comfort of their own home. Currently, there are no legal issues related to 3D printing except for certain gun control policies, so feel free to let your ideas materialize.