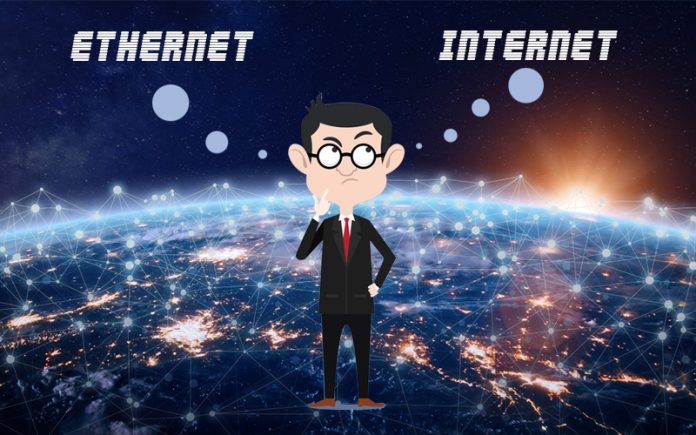 Both internet and ethernet are two types of the network generally used to connect computers. Doesn’t matter which home modem and router you use, these two terms will always pop in front of you regardless of the situation. But they have different ranges and scopes when it comes to their utilities. In this blog, we will discuss all that you need to know when discussing the topic “ethernet vs internet.” So, let us first look into their definitions and then make their comparisons. The internet is a global system of computer networks where millions of public, private, business, academic, and government networks connect with each other to share a massive amount of information, services, and resources. We use the internet to access different websites, send emails, watch videos, and listen to music. It was first conceived in 1969 by ARPA (Advanced Research Projects Agency), an agency run by the US government. Their aim was to design a network so that researchers of one university could contact with other researchers at different universities with their computers.

However, the internet is now a public, self-sustaining, and co-operative facility that is accessible to billions of people worldwide. Today not only computers, but every smart device is connected to the internet. If you’ve heard about IoT, you already know how everything around us is getting connected to the internet. It is like a spider web that interconnects anything with everything. The name “web” and “website” came from this concept. The World Wide Web is the part most used on the internet and its most extraordinary feature is the hypertext that allows immediate cross-referencing.

With the advancement of technology, the internet doesn’t necessarily require any physical cable connection. You can have internet completely wireless channel. You may be wondering what does ethernet mean? Ethernet, as a network, allows several computers in the network to connect with each other with a wired connection. It is like a personal communication network can be either kept private or can also be open to the public internet. Ethernet is considered to be a comparatively inexpensive and fast LAN (Local Area Network) technology that is also very popular worldwide. Although engineers D.R. Boggs and Bob Metcalfe developed Ethernet in the early 1970s, it saw its industrial applications in the next decade.

The traditional Ethernet networks support the transformation of data at a 10 Mbps rate. But there are now faster ethernet specifications like Gigabit Ethernet (1000 Mbps at most) and Fast Ethernet (100 Mbps at most). However, these are not available for the average user and they are used by certain business networks.

All your private and personal gadgets are connected through wired or wireless ethernet. So it’s better to have minimal knowledge of this. Any weakness in your security will allow other people to use internet for free while you pay for it. The good news is modern and good quality routers come with extra security features that will prevent any unwanted breach in your wire/wireless LAN.

Difference between Ethernet and Internet Now that you have some basic knowledge of Ethernet and internet, we will try to differentiate them below.

Internet: This global system of computer networks that are interconnected makes use of TCP/IP protocol to link computers or smart devices worldwide.

Ethernet: This networking technology is used in Local Area Network (LAN) to connect several computers within the main server.

Ethernet: The type of network that ethernet uses is called the Local Area Network (LAN).

Internet: The internet is open to all for accessing the information and data online. Since anyone can access the internet with an internet connection, people can hack your computer or smartphone and plant malware and viruses.

Ethernet: Ethernets are usually safe because it is not so vast like the internet and it is a closed network wherein very few people have access. Some of the users do not even have full access to the network.

Internet: In terms of quantity, there is only one internet that is considered a network of networks
Ethernet: There are numerous ethernets that are controlled by multiple administrators

Internet: The internet is too large to be administered and controlled by a single system administrator or a few of them. There are some private and public agencies that manage or handle certain aspects of the internet.

Ethernet: Ethernet networks are controlled and managed by a single system administrator. For example, in a business setting, the network is run by the technical manager and for home, it’s a parent.

When talking about ethernet versus internet, the main difference lies in the fact that the internet is a vast global network accessible by everyone whereas ethernets are small local networks used by a business organization, for example, to connect few computers in that specific organization.

Face-Off: 3DS Max Vs Maya – Who Does 3D Modeling Better?

Everything You Need to Know about 3D Printing Filaments Simplified