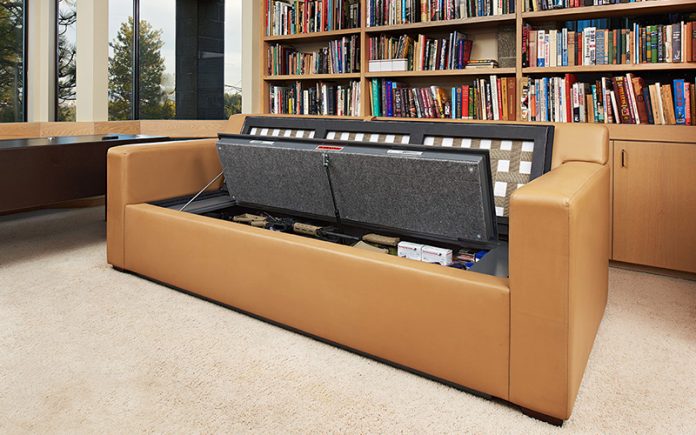 The hardest part of owning guns is storing them. Even with the modern gun safes, the gun owners aren’t safe from burglary. A gun safe also takes up a lot of space in the house. So, we’re going to discuss some little known hidden gun safe ideas. You can not only keep your guns safe from burglars but you can also save a lot of home space.

Out of the different gun safe storage ideas, we’ve selected the 10 best ideas for hiding your guns. If we’re talking about gun safe interior ideas, this is a great idea for storing your guns in your master bedroom. You can store all of your firearms inside a mirror. There are several mirror gun safes available in the market that looks exactly like a full-length mirror but has hidden compartments for storing guns. These mirror gun safes don’t provide the optimum security for your guns but they’re certainly a great discovery and better than the closet gun safe ideas. The mirror also adds to the aesthetics of your bedroom. The safe has a locking mechanism, so someone who doesn’t have access to your firearms won’t be able to unlock it. It’s probably the least costly option on the list. Most of the wall clock gun safes are made from mantel clocks. Due to their large body, the clocks won’t cause any suspicion. Although they are meant to be on the fireplace mantle, you can simply put them on a table, shelf or bed.

It’s not a suitable option if you have children in your house since you have to lock the safe with magnets and it amounts to no protection for children. It’s a great place to hide your firearm from burglars. They won’t be able to guess that there could be a gun inside the clock. You can easily store even the biggest handgun in a gun clock. There are also large wall clocks that can hold rifles and shotguns.

You can turn your bed into a concealed gun safe in more than one way. For example, you can use the headboard as a gun hiding place. It’s not only a safe location for your gun but you can also quickly draw the gun in cases of emergencies. If your bed has posted, you can use them as safes for the long guns. You can easily turn your bedposts into gun safes. Since the bedposts are hollow on the inside, you can remove their top and use the empty space for storing guns. You need to set a hinge on one side of the bedpost and you can get easy access to the weapon by flipping it up.

You can also try hiding your firearms under your bed. You can make drawers on your bed by yourself under the mattress and use them to store weapons using a few essential woodworking tools. You can store your entire collection of firearms if you have a big bed. If you have experiences of working with wood, you can make the headboard and the drawers for storing guns without having to pay any additional money.

Finally, you can build your hidden gun safe room in the basement of your house. Wherever you build it, make sure you’ve used a quality vault door and you’ve covered the door well. There are several gun safe cover ideas that you can use for covering the door. Before you build it, plan out your budget since this costs a lot. You can turn the hollow space under your stairway into a gun safe. This is not a place burglars will look for guns. Make sure you’ve installed a good locking mechanism on the door.

You can also turn one of your stairs into a drawer for keeping guns. If you own a lot of weapons, you can even turn all the stairs into drawers. You may take help of a woodworking shop to make the drawers or you can do it yourself. This is one of the best built-in gun safe ideas since you can get a readymade staircase with storage inside nowadays.

Books are indeed man’s best friend. Now you can turn your book into a hidden gun safe. Simply get a small gun safe and cut one of your books that matches the size of the safe. You have to cut through all of the pages until only the binding is left. Insert the safe inside the book. You’ll get a handy gun safe and you can store it with other books on your bookshelf where no burglar will even imagine looking. But don’t do this if you have children in your house since it’s well-hidden but not well-secured.

No, this doesn’t belong to the walk-in gun safe ideas. You are going to free some space under your couch or sofa and install a gun safe there. The cushions provide good opportunity to store the guns safely under them. Don’t put a safe that’s too large under the cushions or it will appear bulgy. You don’t want anybody to look at your couch with suspicion. Although it’s a great idea, it will cost you more than the other options. The soft cushions will provide safety to the gun safe underneath and it won’t be a problem if everyone in the family sits on the couch.

If you don’t want to buy a gun safe, you can also turn your couch into a hidden gun safe furniture. In this case, you’ll have to make a trap door and then cover it with cushions. It is one of the safest DIY gun safe options if you have children in your house. Another great idea for making a hidden gun safe is turning your footstool into a gun safe. It will be portable and yet hidden from everyone except you. You can also transform your gun safe into a footstool by dressing it correctly. The greatest advantage of this idea is that the safe is not attached to anything, so you can take the footstool to any place you want.

This is a popular method for storing guns and can be seen frequently in Hollywood movies. You can make your own picture frame or get them readymade. The only downside to this method is that you can’t store the big guns inside the frame. It’s mainly an idea to keep your gun hidden in case of an emergency.

You can also use an all-purpose picture frame with storage inside to keep your gun. There are multiple choices for the lock on the frame: key, magnetic and combinations. The picture frame gun safes commonly function by sliding. You can go for another type where there’s a gun stand behind your picture frame.

This might be one of the most covert gun safe shelving ideas. You can safely store your guns inside the vents of your house. For this, you’ll have to buy an in-wall gun safe. These gun safes are designed to be completely hidden. They come with a car that looks like an ordinary blank key card and it operates with radio frequency. Once the safe is exposed to the card from nearby, it will automatically identify the radio frequency of the card and will pry open. The locking system requires batteries, so go for the one that has an alert system to tell you when the battery is low.

You can also get fake air vents that are actually gun safes. All you need to do is replace the existing air vent at your home with this fake air vent. The Advantages and Disadvantages of Using Hidden Gun Safes

With our hidden gun safe ideas, you can keep your firearms safe from any unwanted hands. Make sure that you ensure proper gun safety practices in storing and using guns, especially if you have children in your home.

Gun Cabinet vs Safe | How to Choose Between the Two

4 Simple Steps to Putting Up A Pressure Washing Business

How to Install a Sump Pump Discharge Line Underground | Don’t...