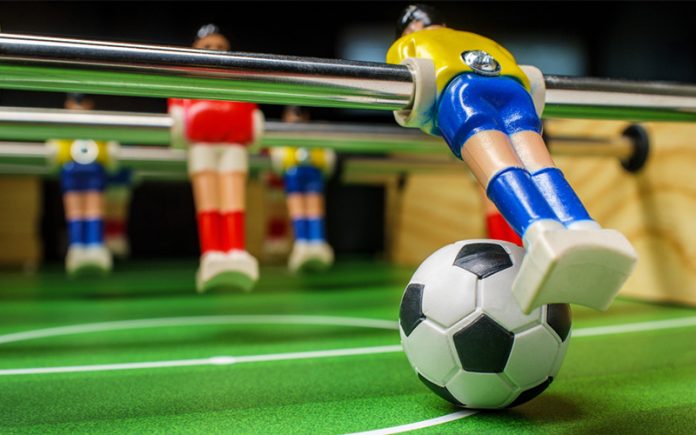 The 70’s popular game is back into fashion as a sporting event. It’s interesting how foosball has emerged as a sport from a simple indoor game. This sport has a Guinness record for holding a 61 hours long tournament. Now, there are countless organizations, pro foosball players and tournaments available for this sport. Getting a good quality foosball table doesn’t make you better at foosball. But you probably love the game of foosball which brings you here. Being a master of foosball demands mastering the foosball shots and tricks. This requires a lot of patience and practice from the player’s part.

Foosball Shots to Ensure Your Win

The name of the shot comes from the action required from the player’s part. The player needs to pull the rod and then release it to score a goal with a single motion. Before you can get a hold of this shot, you have to train yourself hard with the basic foosball techniques.

Tips for performing a pull shot:

This is quite similar to the pull shot but the ball needs to come from a man on the far outside. If you know the basics of foosball game play, this trick will be easier for you. The entire process is done with a single motion. For mastering the pull kick shot, you need to master both ball control and passing skills. You also need to learn the tic-tac passing technique which means passing the ball back and forth among the 3 offensive men. This will deliver a powerful shot with great control and your opponent will not be expecting a shot like this.

This is yet another foosball shot for the beginners. To properly perform the push shot, you need to be able to grip the handle loosely. This will provide you the maximum speed and movement since it limits the resistance. To correctly hold the handle, keep a tiny bit of space between your hand and the handle.

This is not a common shot used by the foosball players and hence it’s unpredictable. You can combine this shot with other foosball shots to completely surprise your opponent. You need to make the shot very quick as if the passing and the shooting were a simultaneous process.

This is a genius shot used by the advanced foosball players. Before getting this shot, you need to master all the basic moves and the table has to be setup properly to avoid unexpected drift of ball due to tilt. This is also known as Rollover shot since you use your wrist upwards on the rod. The shooter of the ball will be the player on the middle of the offensive 3 bar. Although this shot requires a lot of expertise, you can shoot the ball by pulling, pushing or shooting straight once you get the hang of it.

A bank shot is when you use the wall to bounce the ball into the goal. You can use the shot on both offense and defense. But if you use it as an offensive technique, the opponent might get aware and you wouldn’t be able to score a goal. So, it’s safer if you use it from the defensive side.

When you take a diagonal shot on the goal, it’s called a spray shot. This is a controversial shot since it has more cons than pros. You’re basically limiting the ability of your shot placement with this method. There are chances that you’ll miss the correct angle and the ball will miss the goal post. Foosball players deliberately avoid the spray shot.

We’re discussing how to avoid performing a spray shot rather than performing it. For avoiding the spray shots, try to take shots while the players are in a straight position and not tilted. Try to position the ball directly underneath the bar and not behind it. Tilting your player while shooting causes a spray shot and you wouldn’t get the lateral movement when you pull. You can develop a good defense mechanism if your opponent sprays his shots. Keep your defensive players tilted on both ways to tackle a spray sot properly.

This is one of the most difficult foosball shot since you’re going to use a blindspot for this. You’re going to take a shot that your opponent is incapable of defending due to positioning. You can only apply this shot only in a certain type of defense. In this shot, you have to find that space

In this shot, the player catches up to his own pass and fires a shot instantaneously. The shot goes through the space between the player in the defense and the goalie. You can take either a pull or a push shot for this. Take a pull shot when your opponent has his defensive 2 bar towards your side on the table. Since the defender won’t be able to move any further, you can use the vulnerable space to score a goal.

Scoring a goal using a dead man shot is harder than it sounds. You might require a lot of practice for mastering the shot. Move with the ball back and forth, so your opponent doesn’t get aware of your move. You need to take the shot with the offensive player on the center. Keep the ball between the far outside offensive player and the center player to get the perfect angle.

This is one of the popular foosball trick shots. When you combine the tic-tac passing with a shot, it’s called a tic-tac shot. The shot got its popularity from its unpredictability. The name comes from the sound created by the passing of the ball between the players in the same rod. Here’s a guide on how to perform a tic-tac shot:

This might be the most difficult foosball shot and it also depends on which of the foosball balls you’ll use. You have to focus more on your set up than the methods and techniques you use to perform it. To get a hold of this shot, you have to learn to position the ball at the back of the defensive 2 bar. You can watch the foosball trick shots tutorial to learn the tricky shots like this.

Taking the ball aerial and then passing it to the defender are the most difficult tasks in this entire process. So, you need to practice a lot on these steps.

Foosball is again emerging as a competitive sport and to stay on top of the game, you need to master the foosball shots tips discussed in the article. Even though you’re not participating in any competition, you’re only making the game more interesting with these foosball shots. If you’re a foosball lover, get yourself a foosball board and start practicing these shots right away. Make the weekends more interesting with your friends and a game of foosball.

Binoculars vs Monocular: What Should You Choose?

How To Play Foosball By The Rules

How to Be a Pro at Installing and Reading Fishfinders?