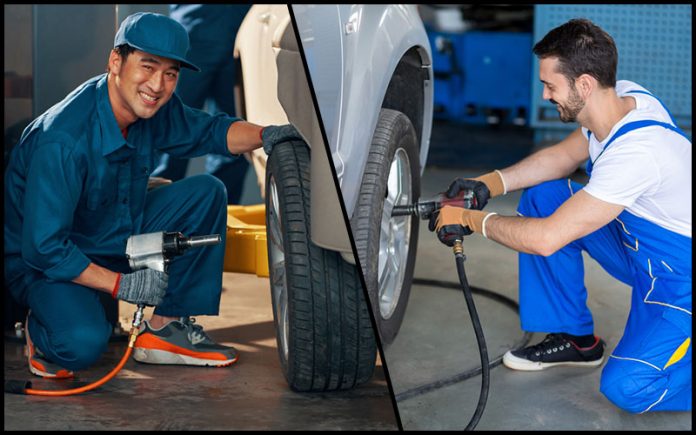 Although a large number of mechanics use impact drivers and impact wrenches in their daily work, many among them actually use them incorrectly. Unfortunately, this happens because they don’t really know the differences between these two types of drivers and their specifications. As a result, they often end up making mistakes in their work and so they are not able to complete their work at ease.

Both impact drivers and impact wrench looks fairly similar and sound a lot alike. Thus, I will be talking about the similarities, differences, applications and give you other information about impact driver vs impact wrench. I will make sure that you are looking at apples to apples and oranges to oranges.

Note: This article does not cover impact drill or hammer drill, or manual or hand impact driver.

It is typically used for driving screws into a material and usually comes with a quarter inch hex chuck. These drivers are very easy to use, so once you get the hang of them, you’ll never want to drive screws again without using one of these drivers.

To attach the phillip screw bit into the impact drivers, you will have to pull the chuck head forward/backward so as to open the adapter’s head and put the bit into it. Or you can also use other attachments with an additional socket. It is mainly used for assembling equipment or driving tapcons into a surface like concrete or wood.

When buying a driver, try to go for the brushless impact driver since it is more efficient than brushed motors. It has a longer life and requires less maintenance. It also has more power and longer runtime.

An impact wrench has a half inch square hat on it which is for half inch sockets or for the heavy-duty impact sockets for taking lug nuts off. It’s built heavily and designed for the force that’s needed to loosen/tighten the knob bolt.

It comes with the socket head where you can attach the square head simply by popping it. You are ready to rock and roll or work on your car. It gives concussive blows that’re perpendicular in motion to the socket, pushing to the side. So whether you’re breaking it loose or whether you’re tightening, its creating an impact to do so.

Both of these drivers have an impact mechanism. This means whenever you’re driving a screw or a bolt/nut or a lag bolt, it gets hammered. For example, if you are using your hand wrench to take off a nut and you can’t loosen it up, you are going to require a hammer to tap it. This way you will break the friction and allow the nut to loosen up. In the same way, whenever an impact driver/wrench finds some resistance, it makes a hammering impact to keep the rotation on.

Impact wrenches are heavy-duty and they have more torque than the impact drivers, so they’re typically used for industrial applications. These are generally used to drive a socket. For example, auto repair that requires to put together the flanges with large nuts and bolts – thats where these are used for.

Impact drivers are used more for driving screws, usually deck screws or even lag bolts. They differ from impact wrenches due to their torques. On the other hand, the impact wrenches typically have a half-inch or 3/8 inch square drive that supports sockets. Whereas the impact drivers generally have a quarter inch hex shank receiver. You can use it by pulling out or pushing in to attach screwdriver bit, square drive, or drill bits that have a hex shank. They easily fit in and lock into the place.

Understanding the Torque of Impact and Wrench Driver

While buying an impact driver try to go for the brushless ones since they are more efficient than brushed motors. They also have a longer life and require less maintenance. Aside from these, they have more power and longer runtime.

In the early 90’s, battery drills started to become popular and more people got dependent on them. But back then you had to drill the hole to put a screw in it. When you were done you had to unscrew your drill bit to put in your Phillips bit and then you had to drive in the screw with your drill. This used to work well and it was dandy for all of us until impact drivers came out.

With the impact drivers, you never have to do it that way. These drivers directly deliver at least three-four times of torque or force to the screw. When you drive a screw in a wood they work by using concussive blows or a hammering effect with the combination of turning. This increases the force and driving ability of this tool.

Since one downside of impact drivers is that they’re not as heavy-duty as wrench drivers, they are designed for driving screws but not designed for robust bolting or taking lug nuts off of cars.

If you have tried the impact driver the other way, don’t feel bad because there’s a lot of people out there who are still confused like you. The reason why you are confused is for the interchangeability of the word of impact gun. We generally think an impact gun means- the gun that mechanically takes your lug nuts on and off of your car. But nowadays we call these driver impact wrenches but not impact drivers.

On the other hand, people make mistakes by buying tool kits seeing that they have the name “impact driver” written on their bodies, thinking “Oh that’s awesome, I’m getting something I can work on my car!” But when you come home and try it on your car wheels, you realize you got the wrong tool.

To conclude, you can take off the lug nuts of your tires with an impact driver. Since most of these drivers have above 125 foot-pounds of torque, your quarter inch drive is not meant for that purpose. Thus, these types of driver are best for driving screws. On the other hand, an impact wrench is more suitable for your lug nut and it is just more powerful. Besides that, your lug will fit in a socket and they’re not going to snap off since they are much larger. As you can know clearly distinguish impact driver vs impact wrench, you will be able to make good use of them.

Developing Your Stamina for Running – Tips and Techniques

Breaking Free from Cable and Phone Lines – The Wireless Option

Nine 3D Printing Projects That You Can Make without Breaking a...