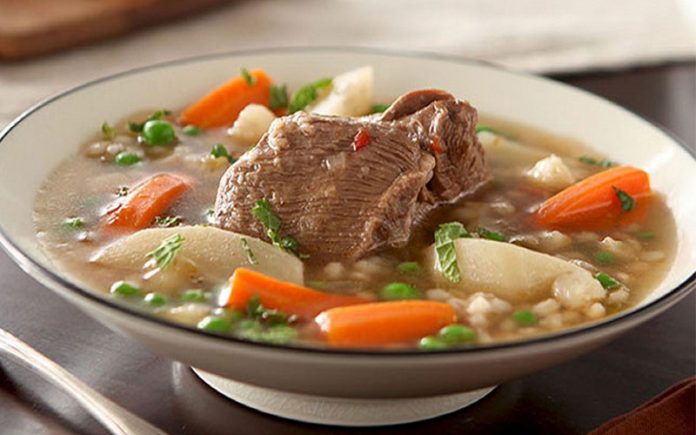 When talking about soup, we always think of the classics like the chicken vegetable soup or if we’re looking for something a bit more exotic, Thai soup. Most of the time beef isn’t the first choice for a soup eater. That’s simply because chicken seems more suitable for soup while beef is mostly used for broth, stew, and gravy.

Even then, it’d be plain wrong to say that some people don’t prefer beef soup at all. Beef is rich in nutrients and taste, and makes for a great soup, just like chicken. If you’d like to try beef soup out for yourself, we have a recipe for you that you can make at home with some simple ingredients. But for these soup recipes ground beef is absolutely indispensable.

We’re not going to talk about anything too fancy that requires a CMC degree (Certified Master Chef) or would make the French chefs jealous. We’re talking about the busy mom’s recipes that everyone can try out without wasting much time. So, without further ado, let’s delve into the 3 basic beef soup recipes that will make everyone go “Wow!” This could be one of the best creamy soup recipes for dinner. For this recipe, you can use the pack of heavy cream lying around in the fridge, some ground beef, and some spices. To make this recipe, prepare the following ingredients:

To start off, peel the onions and cut it into four quarters. Now, separate the layers of the onions and set it aside. Now, chop up the carrot into small pieces. Now, mix in the carrots, chopped up leeks and the onions into a bowl and keep it ready for the soup.

Take a dutch oven or a cooking pot and place the cup of ground beef and 8 cups of water inside. Place it on the stove on high heat and cover up with the lid. Let it come to a boil and then lower the heat to a minimum to bring it to a simmer. Keep simmering until the water level goes down to around 6 cups. This should take around 30 – 45 minutes after lowering the heat depending on the atmospheric pressure and your region.

Once your beef broth is ready, it’s time to prepare the soup. Put in all the ingredients into the broth as it’s simmering – the onions, carrots, leeks, salt, and sugar. If you’re not afraid of a little spiciness in your soup, you can add in one or two jalapenos into the mix. If you’re sure that you’re not serving this food to someone allergic to MSG, you can add in half a teaspoon of msg in as well. For this soup recipe, ground beef and cream add in some umami by default.

Increase the heat to a high level and mix it all together with a spatula. Keep the lid off and stir occasionally, letting the onions and carrots soften. Once they are softened enough, it’s time to throw in the cream and black peppers. It’s always worth remembering that black pepper tastes best when ground up fresh and cooked for less time. Keep stirring the soup on a high heat till it gets its creamy texture and a thick consistency. This recipe uses the same concept of making soup: create a broth, add in the spices and ingredients, bring it to a boil and serve. However, the ingredients and spices are a little different this time. Let’s take a look at the ingredients we’re going to use:

Just like the previous recipe, we’re going to start off with some broth. But this time, we’re going to simmer the vegetables along with the beef to prepare the broth. To start off, add the water, the ground beef, the chopped cabbage, and the spinach. Chop the cucumber, carrot and the jalapeno (if you like it spicy) and then add them into the mixture as well.

Let the mixture come to a boil and let it simmer on low heat with the lid on for at least 45 minutes to one hour. Again, the cooking time varies from region to region due to the atmospheric pressure. Once the broth is ready, it’s time to add in the other ingredients.

You’ve noticed that we’ve suggested 2 pieces of lime for this recipe. However, depending on your taste, you could go for one lime instead if you don’t like it too sour. In case you don’t have a lime handy, lemon would work. Even if you don’t have that, some vinegar and citric acid would do the trick. However, it won’t account for the flavor of the lime, just the taste.

Take the lime, roll it on a flat surface for better juice extraction, and then chop off the middle. Squeeze the lime into the broth. Add in the salt, black pepper, sugar, and MSG. Avoid the MSG if you don’t want to add it. Instead, you can get the same umami flavoring if you substitute it using tomato juice and seeds. However, that will affect the color of the soup a bit. Add in the onions, just like in the previous recipe: cut in 8 sections and get the layers removed.

Cook on a higher heat while stirring the mixture till the onions become softer and translucent. Once it is, this soup recipe – ground beef with vegetable – is ready for consumption.

Tweak Your Cooking to Suit to Your Tastes Making soup is a delicate business. Even for some hardened soup chefs, it’s difficult to make two soups taste the same. Of course, they’ll be so close that most people wouldn’t notice the difference, but there will be some for sure. So, feel free to experiment with the taste of the soup as it cooks. If it tastes too bland watery, know that a little more salt will always solve that problem. If it’s too sour, compensate for it with some more sugar. Likewise, if it’s too sweet or umami, counter that with some sourness.

Despite being so delicate, soup is also very flexible in that regards, unlike most recipes. If you’ve messed up the ratio and added too much salt by mistake, you can add in more water to compensate for that. But in that case, you’ll have to add in a little bit of the other spices to make up for that as well. Sure, it might sound like that can water the soup down, but let’s be real here: when you’re serving it to the guest, the chances are that they wouldn’t even notice if you had added the salt and spices right. Besides, it’s better than serving salty soup.

If you want to make your soup recipes beef up your party, you always want to be prepared. You can just keep the broth prepared and store it in your refrigerator. Make sure to cool the broth down to room temperature before refrigerating. This way, you can store the broth for 5-7 days. So, whenever you need to make a quick meal out of it, you can just heat up the broth, add in the spices/cream, and prepare the soup recipe with ground beef in a jiffy. Remember to serve it with some croutons and sprinkle over a bit of chopped parsley, scallions or coriander for the aesthetics. And never serve your soup cold, that’ll just ruin the taste. Use a soup warmer if necessary. Now go become a “souperman” with these recipes!

12 Steps for a Complete Deep Fryer Cleaning | Get Rid...

The Baker is In: Tips on Making Your Own Dutch Oven...