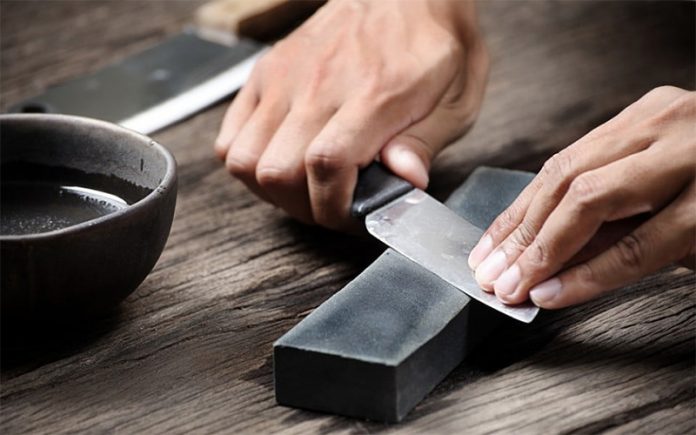 When hunting out in the wild, you get utter satisfaction with a good kill. As soon as you’re done, you want to settle down and enjoy your trophy. You bring out your hunting knife to skin your coveted game.

But the sleek and slim metallic sheen of the hunting knife is gone the moment you flay the skin off the animal. To be able to cut through the tough stretches of skin, you’ll need a very sharp knife that can cut with ease, without you losing your grip. You don’t want to rip the skin off with a dull knife, you want to flay through the layers with ease. And not just for skinning, you’ll also need a sharp hunting knife to make your way through the leaves and branches of an untouched forest trail.

Factors to Consider Before Sharpening the Blade

When you go hunting, you should take a hunting knife sharpener (also known as whetstone) with you. Don’t leave it behind. Sharpening is a skill that can be mastered over time; but before following the process, you’ll need to understand a few factors that are crucial to the whole process.

Types of Blades and Grinds

When sharpening a knife with a whetstone for hunting or combat or any other purpose, fine crystals are produced that quickly remove steel and polish the surface of the blade at the same time. However, no matter what whetstone you use, the sharpening process is still the same. You might have to lubricate with water or oil depending on the type of whetstone you have.

When you buy a whetstone you’ll see that there are numbers written on them. The numbers represent the amount of grit. Less than 1000 means you can use that portion to repair nicks and chipped edges in knives. Anywhere between 1000 to 3000 indicates a grit surface that can be used to sharpen knives. Grit level between 4000 to 8000 is used to refine and polish the knife edge. The lower the number, the coarser the grit surface. So, for hunting knife sharpening, you should start with the lower numbers first to repair the edges. Once the edges reach a desired shape, you can fine-tune the edges by sharpening on higher grit levels, which will give a polished sheen and perfect edge.

How to Use Whetstones as a Hunting Knife Sharpener?

Now that you know the basics, we can move on to the actual process, which is quite simple. Get yourself a whetstone. Depending on the type of whetstone, you need to lubricate it using either water or oil. Also, depending on how damaged your knife is, you need to determine which grit to use. If your knife only needs polishing, hold its handle and place the edge on the whetstone grit level of 4000 at around 10 degrees. Slowly move the portion of cutting edge across the whetstone while ensuring this level. Repeat this process back and forth and do this for the other side as well, until you reach the sharpness you want. Maintaining the consistent angle could be tough; you could use a honing aid for extra support. If your knife is more damaged, start with a lower grit number and then make your way through higher grit numbers for finer edges.

How to Sharpen a Knife Without a Sharpener?

While hunting, you could lose your whetstone or even realize you left your whetstone at home. In such situations, should you give up on sharpening your hunting knife? The answer is, no. There are plenty of objects that can be used to sharpen your hunting knife without a sharpener. If you see any rocks or large pebbles with smooth surfaces nearby, you could use those for sharpening. It won’t be perfect, but at least the sharpness would be usable. However, what if there are no rocks around? If this is the case, you should do the following:

Hunting Knife Sharpening: What to Remember?

Remember that you should use a whetstone for the purpose of hunting knife sharpening. In case you don’t have a whetstone, you could use these objects. Sharpening a knife with these regular items too often could damage both the knife and the object, so make sure that the process is carefully done.

With a sharp, glistening hunting knife, you can finally get your hands dirty and start skinning your game.

6 Tips on Cleaning and Maintaining Your Fishing Rod

Hunting 101: How to Skin an Animal