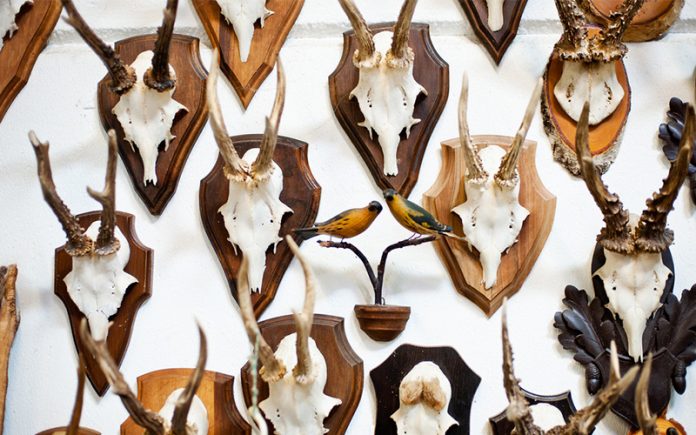 My grandpa was a taxidermist who knew a lot about preserving dead animals and hunting. More interestingly, he lived in Wyoming: a place with about 3,500 sq miles of wilderness and great for hunting. I had visited him countless times during my childhood and early adulthoods, and learned a great deal about taxidermy. He taught me every bit about hunting, how to cape a deer and the aspects of making trophy out of a skull.

Recently I had quite a few requests from my followers who wanted to know about caping a deer skull. Based on my grandpa’s teachings and my own experience as well, I’m here to show you how to clean and cape a deer skull for trophy, also known as the “European Mount.”

The first step is skinning the animal before doing anything else. I always make a cut right up and middle of the nose – that’s exactly where I like to start from and that’s the way I’ve learned to do it from my grandfather. Then make a cut all the way up to the bottom of the antler and run the knife around it. Then, slowly get all the hide off.

Here is a tip for you – if you hit something tough while cutting your kill with your knife, always remember to turn it to other direction. This way, you’ll always cut through the webbing between the hide and the bone. But you might need the right type of knife for this process.

When the jaws have loosened up like a door, you’ll be able to pull them up right from the joint and cut the tongue from the throat. With the tongue removed, there will be nothing left to attach the lower jaw to the upper skull. After you’ve got the lower jaw removed, remove the meat and the eyes from the skull. You will be able to scrape off most of the bits with your hunting knife.

Before you learn how to clean a deer skull, you’re going to have to learn how to prepare it for the cleaning process. After you’ve separated the lower jaw and the meat, you’ll be left with the bare skull and horns. Take a generic shrink wrap which you can buy at a UPS store, or maybe even at your nearest grocery store or at any hardware store. Wrap both of the antlers around six or seven times nice and tight, right down to the bone. Then secure with electrical tapes by wrapping up one more time. The wrapping will keep the antler secure from the boiling water that contains hydrogen peroxide. Hence, it might help in retaining the white color on the base of the antler.

For the best results, put the skull immediately into the boiling peroxide water instead of boiling in OxiClean water. I prefer peroxide because of two reasons – this batch will allow you to boil up to fifty or sixty skulls and you’ll be able to store it for later use.

Every batch of the boiling solution should have 5.3 gallons of solution, containing forty percent of liquid peroxide and sixty percent water. Upon placing it on a high heat, this mixture will remove the tissue super fast right about the time when the mixture started to boil. Once the mixture starts to boil, bring the heat to a simmer for a few minutes. Make sure that you only dunk the skull up to the base of the antler into the boiling water.

Now use a power washer and spray vigorously to split those tissues apart that have already been loosened up by the peroxide. Soon you’ll start to notice the skull getting whiter. Now you need to spray inside every hole, every orifice and anywhere where meat or the tissue grows, making sure that you’re getting all those stuff off. It is important for all the stuff to come off so as to eliminate the odor, stink, and discoloration.

Wash the skull with your power washer in such a way that it looks clean and white. Now take a screwdriver, put it right in the ear canal and pop out the heavy tissue that grows in and around. The hole that you have created through ear canal at the back of the skull is a great angle for you to to get in and pull the brain out. With that, you’ve just learned how to clean a deer skull at a primary level.

For the final time, you’ll be required to dunk the skull one more time back into the peroxide mixture for two to three minutes. Then pull it out and cut the plastic wrap off. Give the skull a real nice water rinse and set it up to dry.

Protip: After drying, brush the skull with Mop & Glo that will leave a clean, fresh scent and give you a great shine on your skull. Keep your Mop & Glo in a jar so that you can easily apply it to your skull and store it for the next one. Besides that, you can recolor the entire set of horns, if your horns discolor while boiling.

However, there are several methods of cleaning a deer skull with boiling hot water, power washing, cleaning with beetles and rot off. There is no right or wrong method. There are both pros and cons to all of them in terms of effort, cost and time. So, the only reason I always use this method is because that’s how I learned to do it from my grandpa. I always boil, power wash, reboil and wash, which really pays off by loosening all the meat and tissues.

I’m not trying to hand you over something and emphasize that this is the only way to do it. I’m just acting as a guide for all the do-it-yourselfers. I believe that I have placed all the guidelines without leaving anything out. And you’re going to have to go through some trial and error during your first attempt. So, once you try it yourself, you’ll learn more from your experience.

But if you don’t have a bunch of extra skulls laying around, I would encourage you to either pick up some roadkill or save the bone in your t-bone steak or ask the local farm or butcher for any bones or skulls to practice how to clean a deer skull. That’s no different than hunting a deer. Hunting will require you to go down to the store, buy a gun or a bow and some arrows, and then drive out in the woods and try and shoot a deer. Here, you learn by sighting with your rifle for a small game before you start deer hunting. Same principles apply here with the same learning curve either way. No matter if you’re hunting a big old moose or just a little rabbit, all your achievements deserve to be hung on the wall!

The Rookie’s Guide to Scoring the Perfect Road Bike