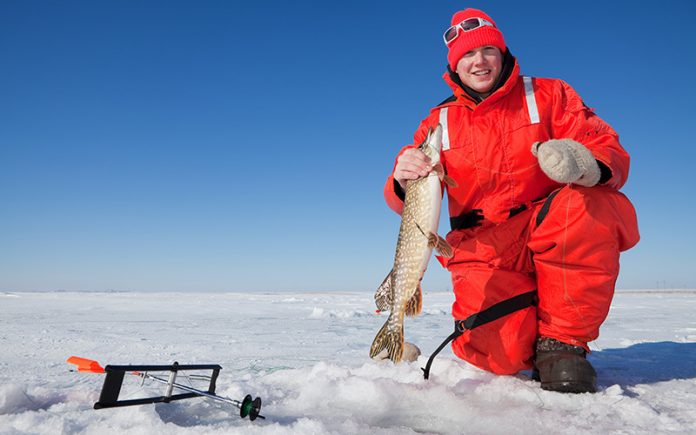 Like any living being, fish need their fair share of food and oxygen. In different parts of a sea or lake, the amount of oxygen as well as food could be different. In the icy regions, due to the lack of oxygen and food, it could be difficult to catch fish for the avid fisherman. When people head towards these regions in the hope of catching fish, they often end up waiting for hours without seeing any sign of fish, leaving them utterly disappointed. To prevent this from happening, you need to be familiar with the right way and the right days of fishing with some effective and useful ice fishing tips.

You can save time and win big using tip-ups. Tip-ups are often used by avid fishermen to catch multiple fish species from different places at once without physically being near the fishing spots. Did you know that you can make your tip-ups with a few simple tips and sheer determination? This article is here to help ensure that you are winning big in terms of catching different kinds of fish from the icy waters, using nothing but some cool ice fishing tips and your very own handmade tip-up! You’ll need to know a few things about fish behavior if you are aiming to become a fishing expert. Fish living in the shallow lakes often come closer to the coast or shallow regions because of limited oxygen in the deeper parts of the lake. Fish living in large deep lakes go deeper where it is slightly warmer. Overall, in winters fish do not tend to stay so active. So you should head out to icy areas in the appropriate times, which is usually the beginning of winter or the end of the season. These are the times when fish remain active even if ice is all around.

You also need to know that fish have a good color vision and they can see up above. So whatever lure you use it should be above the fish. But if the water is shallow you could be visible to them and scare them away. Fooling fish, especially a swarm of fish is not so easy!

You should also know that certain types of fish can be seen in icy waters. Each fish has its own unique feeding patterns. You should get accurate information on these feeding frenzies which occur at some very specific times. Some species actively stay in groups throughout the day while others tend to swim in groups only at dawn or sunset. Fish are more active when the weather is stable and their feeding frequency increases when there’s a new moon in the sky. Now that you know a thing or two about fishing, here are some effective ice fishing tips that will help you score your coveted fish and impress everyone around you.

Tip-Up Fishing: A Must Try As said earlier, tip-ups are usually used to catch Northern pikes. A tip-up is a small and simple contraption machine that points out a flag when a fish bites on the bait attached to the hook. Yes, it is that easy! Another advantage is that you can take as many tip-ups as you want; they are light, compact and portable. Place them near different holes that you dug out with your ice auger and wait to see when the flags are raised. A larger minnow bait increases the chances of catching a larger pike.

A lot of people have this misconception that when winter arrives, fishing is over. But that’s not true for the fishing enthusiasts because winter gives them something more than just fishing. They get to do fishing in the incredible icy cold atmosphere and have a thrilling experience. They get to eat and try different kinds of fish, connect with nature and meet new people. The best lakes for fishing are in the Midwest America i.e. in Wisconsin, Minnesota, Michigan, North Dakota, South Dakota and Iowa. Do you want to miss out on that thrilling experience and sit back on your couch doing nothing? Do you really want to miss the chance of going on a long fishing trip with your family and friends? Think about it.

10 Expert Tips to Consider When Getting an Inflatable Kayak

Things to Know before Delving into Archery