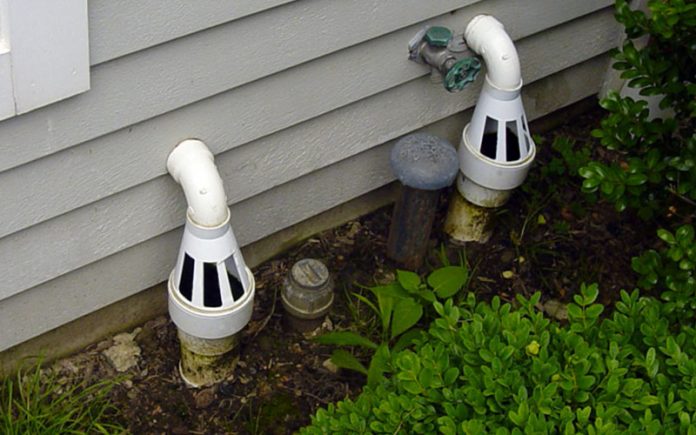 The performance and the sustenance of the sump pump mostly depend on the discharge line. Most of the people don’t care about the line since it’s underground. But we’ll talk in detail about the problems and dangers associated with the discharge line and how to solve those problems.

If the discharge line isn’t installed properly or is used all year long, it will result in potholes on the paved roads, water clogging on the unpaved lanes, and problems in the local streets or sidewalks. We’ll talk about the different sump pump discharge ideas in the coming sections.

At first, check for the frost line depth in your area so you can install the discharge line below the frost line. Now follow these steps thoroughly:

Sump pump discharge freezing is one of the most common problems with sump pumps. But with some simple tricks, you can easily avoid confronting this problem.

2. Not the Right Size of Pipe

A good sump pump depends on its construction, float switch, and horsepower but its pumping capacity is the most important thing while considering its performance. The same thing can be said about the size of the sump pump discharge pipe. The usual diameter of the discharge pipe is 1.25” to 1.5”.

Anyone with basic knowledge on how sump pump works, knows that, sump pump works the best when the discharge line diameter is large enough to carry the water out. With reduced size comes less efficiency. This is because the pump can’t push the water out of the pipe due to the back pressure created by the intense friction inside the pipe. This delay in discharge makes the pump run more frequently and creates a heavy load on the machine. As a result, the machine’s overall lifespan gets reduced.

The correct sump pump discharge pipe size will let you avoid these problems and you wouldn’t face any issues during the rainy season or winter.

While using a sump pump, the user often doesn’t care about the discharge line’s direction. But for the betterment of the environment and the longevity of the sump pump, you need to follow some rules of sump pump discharge.

1. Position the End Point of the Pipe Correctly

If you keep the end-point at a lesser distance than this, the discharged water will get absorbed by the same soil that originated it. Thus, your sump pump will overwork for nothing and the soil around your foundation will get damp. The repetition of this will result in foundation damage and even collapse.

After getting the distance right, make sure there’s no septic tank around the discharge location. Since the septic tank already deals with the water overload, putting the pipe there will just add to the existing load. This will again result in the overflow of water on top of the surface.

3. Make Sure There’s No Sewer System Around

If there’s a sewage line near your sump pump discharge line underground, it will be a mess and there are chances of sewage flooding. Most of the city ordinances won’t even allow it in the first place. Check with your local city codes and try to avoid the sewage areas for discharging the sump pump water.

4. Check if the Hose is Correctly Attached

The main discharge line of a sump pump is a PVC pipe and you need to attach a hose or a tube to it. Make sure the hose is correctly attached to the PVC pipe, or water will leak and flow into the foundation of your home. Also the material of the hose should be made from anti freezing materials so water wont get clogged during winter.

This will also corrode the discharge pipe and put the sump pump through overwork. This will add extra maintenance costs and lessen the lifespan of your sump pump.

For this, you’d have to dig soil beside the walls of the basement. Install boards and drainage pipes along the lines of the wall. If you can do this, you’ll be able to successfully separate the surface water from the basement wall. Since this method is expensive, only install an additional drainage line if you have walls that go beneath the ground.

Sump pump discharge line underground is a vital part of the sump pump. The performance of the discharge line dictates how the pump is going to perform or how long it’s going to last. Try to maintain the line, at least, on a half-yearly basis. If the line gets clogged, frozen or dysfunctional, your sump pump will become useless sooner or later. We’ve introduced the problems and mentioned the ways to solve them, so you can avoid getting into any trouble regarding your sump pump.

Pressure Washing Chemicals and How to Use the Proper Solution

The Top 15 Woodworking Tools Every Beginner Must Have!