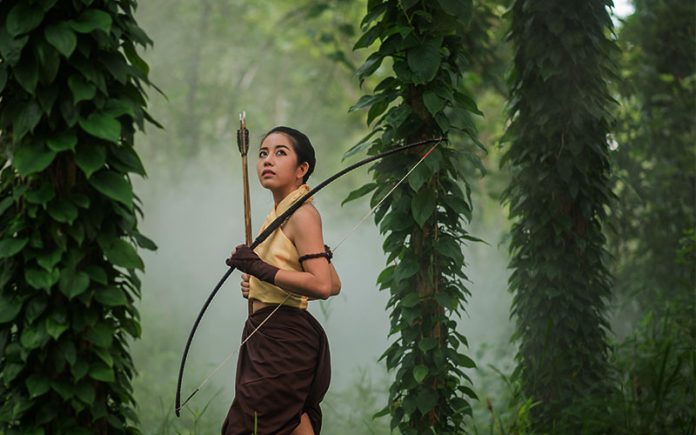 Bow hunting has been around us for thousands of years. During the Stone Age, it was the primary way of hunting animals for food. Technological advances have now made bow hunting a recreational sport, a hobby amongst many people here in the USA. Although there have been vast improvements, the tactics and skills required to silently fool and kill the prey quickly, have largely remained unchanged. In some parts of the world, bowhunting is illegal or restricted under specific conditions. A study conducted in 2011 by U.S Fish and Wildlife Service has shown that around 33% of the American population used bows for hunting instead of firearms. The popularity of bow hunting continues to grow despite these limitations, with the recurve bow hunting being a popular choice due to its swift and effective killing capacities.

Bows vs Guns: Which One Fares Better? Many hunters love using bows rather than firearms for a variety of reasons. Bow hunting seasons last much longer than firearms seasons. During those seasons, game animals are more abundant as well. Also, bow hunting is more challenging and thrilling. It requires more use of human instinct, precision and the ability to act under stealth mode. Bows have a limited range of thirty to fifty yards. Using target-directed cognitive skills in such a short range for killing requires practice, and when you are finally able to get a game, the feeling of satisfaction is immense. Arrows are much quieter than guns, which means you can easily kill game without frightening out other animals nearby. So, bow hunting can be a good way to improve your fitness and cognitive observation skills. Recurve bow hunting is very popular among both beginner and skilled archers. Recurve bows are designed in a shape that allows the arrow shots fired with more power, requiring less. Once fired, the bow curves away. Recurve bows are better for short-range quick and precise targets, which is why these are the only type of bows used in the Olympics. Recurve bows used for hunting typically have shorter sizes so that they are easy to manipulate around trees and bushes. The attacks are much sharper and stronger. However, simply having a good bow and the intention to hunt will not suffice. A crucial part of a successful hunt is knowing how to attack, when to attack and where to attack. Simply having a good recurve bow and the intention to hunt will not suffice. A crucial part of a successful hunt is knowing how to attack, when to attack and what to attack. Here, we have provided a few basics. It is still good to go for archery practices and develop hunting skills before actually going hunting during game seasons.

First, you have to estimate the judging distance. You will have to scan your surrounding area, familiarize with the trees and bushes and determine the location of the prey. You could provide bait to lure the prey near you, but not so close that it ends up sensing your presence. Now you have to aim at the target, which depends on how far away it is. The accuracy of your shot will depend on your recurve bow, your position and strength and also the type of arrow. Arrows are generally silent but if they make a little bit sound you can get string silencers. Before shooting, make sure nothing on the bow is rattling or making sounds. Now that you are near the prey, you can aim to shoot. Connecting to nature during your animal hunt is important, which can be made easier by having a few bow hunting accessories around. These gears will help your tactics to be more efficient and your hunting experience worthwhile. Other than quivers and arrows, here are a few bow hunting equipment that can help you get your game successfully. You cannot just walk into a wild forest with your recurve bow and a quiver full of arrows, without considering government rules and regulations. These laws are there to prevent uncontrolled hunting and preservation of game animals, especially during particular seasons. Some states consider bow hunting to be legal but only under specific conditions, such as age or requirement of certain bow features, not hunting particular animals, etc. In some states, a recurve bow would be allowed but not crossbows. In most states, barbed, poisoned, drugged and explosive arrows, or arrows loading automatically are prohibited. Use of electronic devices on bows are allowed in some cases. So it is always best to know about these laws and abide by these laws for during hunting.

These states allow bow hunting in all seasons with no size restrictions or minimum draw requirements:

These States Do Allow Bow Hunting but with Certain Conditions: The states of Montana and South Dakota have donned bow hunting as illegal or partially illegal.

Bow hunting has largely been a survival method for thousands of years but now it has become a sport and competition among hunters, especially during particular game seasons. Instead of wooden arrows, now recurve and compound bows are used to kill deer, birds, fish, bison, bears and other creatures. Recurve bows are very popular for their ease of use and powerful arrow shots. With the necessary gears and right use of tactics, hunting for prey can seem extremely thrilling and exciting. Killed game animals are cut and preserved by many hunters. Some hunters even use these preserved parts as trophies for bragging or sell them as souvenirs. Unlike firearms hunting, bow hunting is legal in most US states, given you follow certain rules and conditions. It is best to talk to a professional archer or hunter before you step into the wild looking for your kill.

Ice Augers 101: Different Types and How to Sharpen Them

Cheat Sheet: Master The Types And Parts of an Arrow