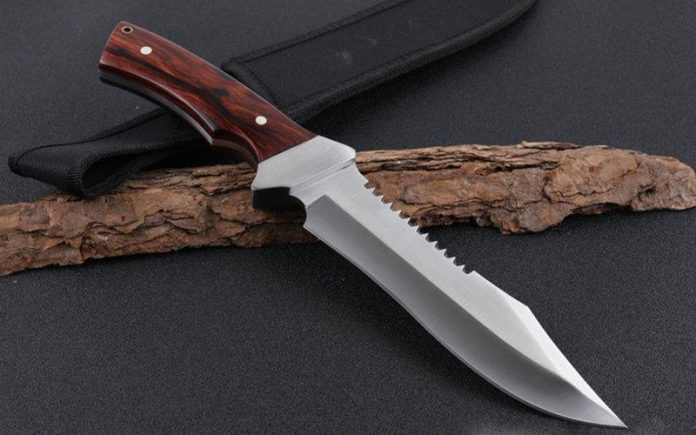 When we see the “bad boys” in action movies do cool stuff and take down enemy after enemy with their bare hands and/or weapons, we get our adrenaline pumping. But in real life, a dangerous situation is no walk in the park. In fact, taking a life isn’t as easy as movies and video games like to depict either. There are going to be consequences for your wrong actions, whether you are the perpetrator or the victim.

As a perpetrator, your wrong actions will have serious consequences on your moral standards, wrack your whole being with guilt and have devastating legal repercussions. As a victim, your wrong actions can lead to minor scrapes up to grievous injuries and even death. So, it’s always better to be prepared with the knowledge required to defend yourself, and learn to differentiate between excessive force and necessary evils before trying to wield the sacred knowledge of the Martial Arts.

With that out of the way, let’s look at some of the combat techniques using a tactical bowie knife and against one.

Prevention Is Better Than Cure

The first thing you’re going to have to decide is whether to get into a fight in the first place or not. Remember, in most of the cases, an unfavorable situation can easily be neutralized through talking things out. Statistics say that most of the drunken brawls and bar fights can be neutralized with a simple apology. However, there are times when you can’t talk things out. That’s when you’re going to look for other options like running or driving away, hiding from the perpetrators, calling the 911, and so on.

It’s even more important that you don’t put yourself in such a situation in the first place. Just avoid dark alleys late at night and keep your distance from a disgruntled drunk. Don’t go showing off your machoness (if you’re a guy) when someone looks at your girlfriend funny. All in all, don’t go looking for trouble. But even then, life gives no guarantee that trouble won’t find you. And when a fight is absolutely unavoidable, it’s time to get your head in the game.

Before starting any confrontation, you’re going to have to know your limits. If you’re faced against a 6 feet 10 inch hunk of muscle staring down at you, drunk from head to toe; look for other options. You’re probably not going to be able to do anything to him even with your 3rd-degree black belt (if you have one) when his drunkenness is nullifying his sense of pain.

Another scenario would be you facing a group of muggers all armed to the teeth. You’ll know that if you try anything funny here, you’d be swarmed and outnumbered in no time. Just give up that brand-new iPhone if you have to, but save yourself the heroics. Remember, discretion is better than valor.

Of course, there are times when you’re going to have to go for it. For example, when a woman is facing the threat of sexual assault or if a person is facing life-threatening odds. Even if a person is about to get bullied, it’s better to fight back than have the bullies walk all over you. At such situations, you need to understand one thing:

“Fights aren’t won with techniques, strength or speed; they are won through your will.”

With the increase in the number of cases of assault and violence nowadays, it’s always worth being prepared for the worst at all times. Women will greatly benefit from carrying self-defense weapons, such as a taser or a pack of pepper spray. Statistically, these weapons can help you out of a tricky situation better than any martial arts training you’ve had. Of course, I’m not discounting your dedication and skills that you acquired from your martial arts classes (if you have them). I’m only talking about the most effective solution to a dangerous situation.

Carrying a knife, maybe a small pocket knife or anything sharp, in general, can help you get out of a precarious situation better than what your bare fists can. Even if you’re a pro boxer, let me ask what would be more effective: Your bare fists or when you’re wearing brass knuckles? The answer is obvious here. But in cases where you’re not equipped, you could just make a makeshift weapon out of your keys or a pen. You can even go for the trash can next to you or smash a glass onto the assailant’s face. Find anything you can and use them against the assailant as a weapon.

So, you’re carrying a weapon and that puts you at an advantage. But how are you going to bank in on that advantage and get yourself out of the fix you’re in? That pocket knife or a tactical bowie knife that you’ve been carrying won’t be of any use to you if it ends up in your opponent’s hands because you didn’t know how to use it.

You’re definitely going to need to know the basics of knife fighting so you can make good use of the weapon you’re carrying or just happen to find or improvise. Some of these techniques can be used even with kitchen knives or a metal rod or even a broken bottle.

Step 1: Get in the correct stance. Keep your knees slightly bent and stand at a 45-degree angle to reduce the area where the enemy can attack from both the front and the sides. Keep your legs slightly apart, ready to bounce on your toes if necessary. Bring your both hands up to your face level but away from the face as far as possible with your elbows still bent. This will allow you to keep your enemies as far away from you as possible and increase your range of attack, at the same time protecting your joints from any counter attacks since they’d be bent.

Step 2: Grab onto your weapon. Hold onto the knife in a hammer grip (that is, the stabbing motion will not be a thrust but a hammerfist motion). When going in for the attack, be vicious and fast. Use short stabbing motion when going for the offense.

Step 3: Keep your eyes on your footwork. Keep stepping towards your opponent as you make the thrusts. This will not only make your opponent back off instinctively, but will also make you look threatening and dominant and stop their advances towards you. When going defensive, change your grip to a thrusting one and start swiping as you back off. This will help you keep your opponent from reaching you as well as keep them at bay, threatening them and informing them that you mean business.

Step 4: If your opponent is also carrying a tactical bowie knife or some other type of combat knives, you’re going to have to use your bowie knife for survival. Keep holding it in the hammerfist grip and press the flat side of the blade against your wrist. Put your other hand onto the handle to improve the grip and then use the knife’s blade as a bracer to defend against the oncoming blows. Most of the times, knife attack victims are left with more injuries to their arms than their bodies, known as self-defense wounds. This will help you reduce those numbers of scratches on the arms.

In the end, if you stick to these basic techniques, you’re going to be able to protect yourself till you get help or the assailant gives up. So, the best way to stay safe is to avoid dangerous confrontations. If that means taking the long way home or staying away from your favorite bar, so be it. But never be afraid of taking on a challenge if a fight is inevitable. You can’t go into a fight half-heartedly and hope to win. If you have to run, run. If you have to fight, then fight. Don’t hang around indecisively in the middle. Always carry safety measures with you and if push comes to shove, be courageous, stand your ground and be prepared to follow the basics mentioned in this article. Stay safe and stay strong.

Experience the Coolest Kayak Fishing Adventure with These Accessories

The Ultimate Guide to Choosing the Ideal Road Bike Under Budget